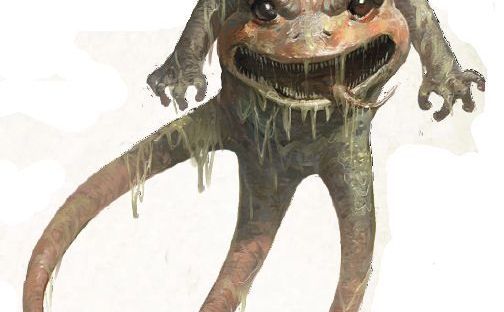 According to abookofcreatures, these fairies are far removed from the cleaned up and sanitized Victorian ideal we are used to.

In the world of cryptozoology, there exist both beautiful fairies, but also ugly fairies, which can be cruel, vile, and parasitic.

The Alp-luachra are one of these.

Native to Ireland, where it can be found all across the island, the alp-luachra is a small, newt-like creature not unlike Ireland’s native smooth newt (Lissotriton vulgaris).

Any similarities with the non-cryptid counterpart end here, however. The smooth newt is a harmless inhabitant of local ponds, while the Alp-luachra lives off “the Pith or Quintessence of what the Man eats,” as Robert Kirk puts it in Secret Commonwealth of Fairies.

Infestation is simple enough. Anyone asleep outdoors is at risk. Especially those asleep near the water’s edge. Alp-luachras slip into the open mouths of sleepers, and from there work their way into the stomach. The entire process is painless, and hosts are never aware of their slimy new occupants. That is, until the symptoms manifest themselves: pain in their sides as the alp-luachras make themselves comfortable, and increasing, insatiable hunger. The alp-luachras eat the food ingested by their hosts, growing larger inside them until their wriggling becomes unbearable; meanwhile, their hosts waste away, becoming gaunt and emaciated.

In the span of a few years, the unfortunate victim eventually dies of starvation, and the alp-luachras move out to find new victims.
As the alp-luachra’s metaphysical state prevents it from being seen by physicians, it must be tricked into leaving the body by other means. Inhaling the strong fragrance of savory food can coax them to come out, as can eating very salty food. Once outside the body, the alp-luachra can be licked to cure burns, if you can find a way to catch it! This will be very difficult since they are hard to see even to those with a trained magical eye.

According to warriorsofmyth, the Alp-Luachra is entirely invisible. Invisible on all spectrums, and involuntarily so. It has no true physical appearance. In addition, it is capable of rendering the mouth and gullet totally numb, so as to make resisting it even harder.
And once it’s safely down in one’s gut, it can breathe easily, capable of resisting the stomach’s acidic fluids with no difficulty or harm to itself. Not to mention, due to its feeding on the greater portion of what its host intakes, it is an excellent agent of weight loss in bigger beings, and or preventing weight gain in smaller beings.

In Douglas Hyde’s collection of folk tales, Beside the Fire, a farmer, who was starving from an Alp-luachra, was eventually rid of the fairy. He was instructed to eat large amounts of salted meat and, when he could eat no more, lie still with his mouth open just above the surface of a stream. After having been driven to thirst by the salt, the offspring of the Alp-luachra, and eventually the Alp-luachra mother herself, jumped into the water. Hence, to rid one’s self of an Alp-Luachra, one should eat a large quantity of salt beef, without drinking anything, and then lay by a running stream with mouth wide open; after a long wait, the Alp-Luachra will become thirsty, and will jump into the stream to drink.

You are a exterminator in the magical realm and the Alp-luachra have been a notoriously elusive species for your crew for centuries. You have the desire to be the best in your field and set out to develop a salt/ host rehydration pill in your private laboratory. It is sterile there and you have a gaggle of Alp-luachra taken from the bodies of the victims, which you have taken care of for scientific testing purposes. This is a heinous beast, you would never keep them thriving if it wasn’t for the research. The Alp-luachra is a small creature but mighty and the infestations have grown so common, and so pervasive that you decide it is time to release your remedy to the masses. You have a pharmaceutical company that you have partnered with and are ready for launch, but on this cloudy, overcast day in October…your pills are missing…all of them.

Who doesn’t want the Alp-luachra to be eradicated? Who is behind this evil plot to ruin you professionally?

If you find this article fun and interesting and you decide to expand on this story -let me know how it continues in the comment section below, and as usual…happy writing!

1 thought on “Mythical Creature, ‘the Alp-luachra,’ a tapeworm like, ‘food stealer,’ from Celtic Mythology and writing prompt”