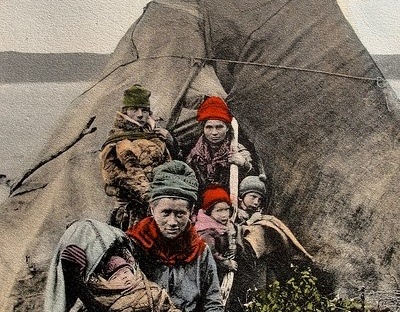 While the Sami, or Lapps (formerly named), are commonly thought of as the inhabitants of Lapland…they have never had a country of their own.

According to everyculture.com, the Sami live in Norway, Sweden, Finland, and Russia. Their neighbors have called them Lapps, but they prefer to be called Samer or Sami, since Lapp means, a patch of cloth for mending and was a name imposed on them by the people who settled on their lands and is considered a derogatory term.

The Sami refer to their land as Sapmi or Same, and first appeared in written history in the works of the Roman author Tacitus in about AD 98. Nearly 900 years later, a Norwegian chieftain visiting King Alfred the Great of England spoke of these reindeer herders, who paid taxes to him in the form of furs, feathers, and whale bones.

Traditionally, the Sami believed that specific spirits were associated with places. Many of their myths and legends talk about the underworld. Others involve the Stallos, a race of troll-like giants who ate humans or sucked their strength out of them through an iron pipe.

According to everyculture.com, another kind of villian in Sami folklore is the stallu, a wicked person who can shape shift.

The Sami creation myth, is directly related to the harsh environment around them. It tells the story of a monstrous giant named Biegolmai, the Wind Man.

In the beginning of time, Biegolmai created the Sapmi region by taking two huge shovels, one to start a funnel of wind and the other to drop huge amounts of snow, making it very difficult to live there. One day, however, one of Biegolmai’s shovels broke, and the wind died down, and the Sami were able to enter the Sapmi region.

There are other Sami epics which trace Sami ancestry to the sun. In the mid-nineteenth century, a Sami minister, Anders Fjellner, recorded the epic mythical poems in which the daughter of the sun favored the Sami and brought the reindeer to them. In a related myth, the son of the sun himself had three male children who became the ancestors of the Sami. At the time of their deaths they became the stars in the heavens, and can be seen today in the belt of the constellation Orion.

One of the most famous Sami folktales is the story of “The Pathfinder.” In it, a Sami village is attacked by a marauding tribe from the east called the Tjudes. The village fights as best it can, but the invaders vastly outnumber the Sami and soon kill all but one—a young boy. The Tjudes then force the young boy to lead them to the next village where they will attack and overtake it as well. The boy reluctantly agrees, leading the Tjudes by night through the mountains. Of course it is very difficult to see at night in the mountains.

At the top of one peak, the Tjudes discussed their plotted course, deciding to wait until morning to go on. They feared they would lose their way getting down the slopes. The Sami boy, however, urges them to follow him. He says he knows the mountain well and will lead them by torch. He suggests that they all tie themselves together by rope, so none of them get lost. The Tjudes agree, grateful that the Sami boy has become so loyal to them.

As they make their way down the mountain, the Sami boy leads them to a great cliff… which only he can see. Stopping at its edge, he tosses his torch over into the great expanse, yelling, “Follow me!”

The Tjudes, tied together, unaware of what befalls them, lunge over the edge to their deaths.

The Madderakka- or Akka Spirit

“Akka,” is traditionally a female spirit in both Sami and Finnish mythologies. Akka means old woman and in Finnish it means great grandmother or ancestress.

Madder holds the meaning of earth or ground, but Madderakka is the Sami goddess of childbirth herself.

She is assisted by three of her daughters Zarakka, the cleaving woman, Uksakka, the door woman and Juksakka, the bow woman who all  watch over the development of children from conception through early childhood. The following story comes from goddesses and gods blogspot, and tells of the nurturing nature of these spirits.

“MADDERAKKA” AND HER MALE COMPANION “MADDERATCHA “WERE, ACCORDING TO THE LAPPS, THE DIVINE COUPLE WHO CREATED HUMANKIND. MADDER-ATCHA WAS RESPONSIBLE FOR THE SOUL AND “MADDERAKKA” FOR THE BODY. TO FORM A CHILD THE SPIRIT WAS GIVEN TO “MADDERAKKA” WHO CREATED THE BODY FOR THE SOUL WHICH HAD BEEN RECEIVED FROM RADIEN, THE WORLD RULER DEITY, AND THEN PLACED IN THE MOTHER’S WOMB. WHILE “MADDERAKKA “HAD GENERAL CONTROL OF FERTILITY, HER DAUGHTERS WERE MORE DIRECTLY INVOLVED WITH HUMAN REPRODUCTION.

“JUKSAKKA “CAN CHANGE IN THE WOMB A DAUGHTER TO A SON. ZARAKKA” WAS ALSO THOUGHT OF AS THE SEPARATING WOMAN WHO MADE CHILDBIRTH EASIER AND WAS CONSIDERED TO BE A DEITY OF WOMEN IN A MORE GENERAL SENSE, AIDING THEM IN WOMEN’S CONCERNS SUCH AS MENSTRUATION. IT WAS SAID THAT SHE SUFFERS THE PAIN OF CHILDBIRTH RIGHT ALONG WITH THE MOTHER. “USSAKKA” WAS BELIEVED TO RECEIVE THE CHILD AT BIRTH AND CARE FOR IT, PROTECTING IT FROM ACCIDENTS.

“MADDERAKKA” LIVED INSIDE THE WALLS. THE PLACE OF “ZARAKKA” IS IN THE MIDDLE OF THE HOUSE, BY THE HEARTH. “UKSAKKA”, THE OLD DOOR WOMAN, WAS SUPPOSED TO GUARD THE ENTRANCE TO THE HUT. THUS A LITTLE MILK WAS ALWAYS THROWN OUT OF THE DOOR AT MEALTIME IN ORDER TO WIN THE FAVOR OF THE UKSAKKA AND JUSAKKA WAS PROBABLY AT THE BACK OF THE HOUSE.

Imagine a world where Biegolmai still roams the earth and he takes instead of creates. In this world Madderakka is anything but nurturing. She is a modern woman who is very career driven and has her three daughters working for her.

They make it look like she really can have it all. The daughters, in addition to the fertility and child rearing support have also taken on the duties of press secretary, PR manager and sales manager. For a hefty fee, you can have either a boy or a girl of your choosing, but you must pay extra for a child to be healthy and to have no birth defects.

How did the Spirits devolve into what they are today? Why have they become so self involved? They are the ones who are suppose to lead and inspire us…has working so closely with us caused our nature to become their own?

If you find this article fun and interesting and you decide to expand on this story -let me know how it continues in the comment section below, and as usual…happy writing!

1 thought on “Mythical Creature, “the Akka,” a Sami, Scandinavian and Finnish goddess – with writing prompt”