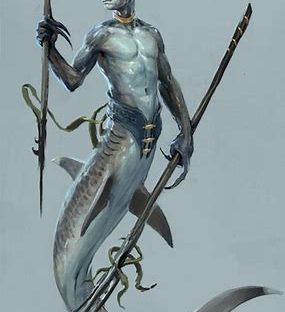 Have you ever heard of the Adaro? There is illustrative information about him on this amazing Mythical Beast Wars site where they hold a Bi-Weekly Mythical Beast Drawing Contest open to anyone who’ll submit. The winner gets a shirt and they are now offering prizes for participation. It is a very fun site to look through.

Anyways, Mythical Beast Wars says that the Adaro is a 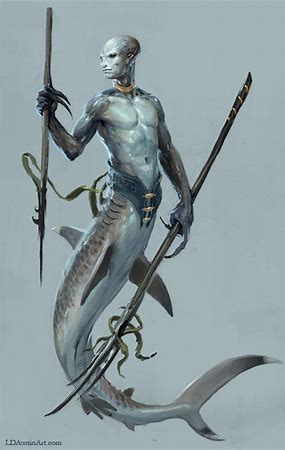 shark finned malevolent merman from the Solomon Islands, who is famed for flinging poisonous flying fish.

The Adaro is very dangerous. It is said to arise from the wicked part of a person’s spirit, which is divided between the Aunga which dies, and the Adaro which stays as a ghost, which is a complex theme that will be used later in the writing prompt.

Adaro are both humanoid and aquatic, with gills behind the ears, fins instead of feet, and a shark-like dorsal fin. It also has a sword fish like spear growing out of it’s head.
Adaros are said to live in the sun and travel back and forth to Earth by sliding up and down the rainbows. They also use sun beams to travel and often move about through waterspouts.

Adaros are dangerous to humans and kill by shooting people in the neck with poisonous flying fish… However Adaros also visit men in their sleep and teaches new songs and dances.

Writing Prompt Background and the Kakamora

According to solomonencyclopedia.net The Solomon Islands have many intriguing stories. There are some who believe that giants still live in huge caverns under the islands and that kakamora (the cute anthropomorphized coconuts depicted in Moana,) are presently roaming deep in the bush. Kakamora, according to the myth are legendry midget humans of Makira, Guadalcanal and Malaita, and are said to be about one-half to one meter in height, with long black hair and long fingernails.

Kakamora are believed to hide in the mountains, living in caves and eating wild bush foods. They have a mischievous reputation and are said to become aggressive when cornered. Rev. Charles Fox seemed to believe they existed when he wrote about them in his book, The Threshold of the Pacific (1924), and he used the name as the title for his autobiography. Rev. Fox said that they,

“…build no houses, have no tools, make no fires, but they are strong and live in holes or caves.”

Kakamora are similar to the fairies or goblins found in European mythology. However, there were also very short people living in the Solomon Islands such as those seen by District Officer Dick Horton in the 1930s at Veramakuru village on Guadalcanal. An archaeological discovery in the 2000s, shows that a pre-modern human-related race once lived on Flores Island in Indonesia and this has restored some plausibility to the Kakamora myth.

Since the mythology of the Solomon Islands utilizes the natural resources most readily available…like many myths seem to do, we will have an earth, wind, fire and water theme in this writing prompt and will use the 4 classic elements for character development.

The Adaro comes from the sun, and the Kakamora comes from the earth. So, three of the four classical elements are immediately represented in this developing story. Just like the Adaro’s struggle between good and evil, so too do the natural elements in their personality. Fire for the Adaro-sun creature…who also embodies water and earth for the Kakamora who live in the bush.

There is a clashing of the four elements in this story. Fire and water want to dominate the region, but earth has the grounded, stubborn idea that they are the dominant creatures of the land. This writing prompt is about internal struggle. The forces that both drive us and hold us back. Both creatures are fighting within themselves as well as outwardly to find a way to reign supreme…that is until a prince is born.

This prince is of the cooling winds. The climate of the Solomon islands is tropical, of course, but the temperatures are rarely extreme due to the tranquil winds blowing off of the surrounding seas. This prince knows no internal struggle. He was born into dominance and the Adaro and the Kakamora have a problem with that. What happens next?

If you find this fun and interesting and decide to expand on this story- let me know how this story continues in the comment section below, and as usual…happy writing!

3 thoughts on “Mythical Creature, ‘the Adaro,’ evil merman of the Solomon Islands- with writing prompt”