According to Bear Nation online – in Native lore, the Acheri is a demon who brings disease upon the defenseless, especially children. The malevolent spirit lives in the mountain tops and comes down to enter settlements at night, singing and dancing, and sometimes playing the drums. The demon casts it’s shadow like a contagious net, and the falling of the Acheri’s shadow is like the breath of someone who has a highly communicable respiratory disease breathing directly into your lungs, like what would happen in mouth-to-mouth recesitation.

Infection occurs instantly, and spreads rapidly throughout the body and then across the community.” [1] .

The Acheri is found in both Eastern and Western paranormal sub cultures and folklore.
Because of the confusion with the term “Indian,” this spirit can be found in Hindu mythology, as well as North American Native Indian storytelling.
In both cases, the Acheri takes the form of a little frail girl, with a pale, gray complexion. This female demon is said to enjoy human misery.
It is believed, that the Acheri was once herself an ill child who died in pain and suffered greatly. If one hears its singing or drum playing, it signifies the forthcoming of an incurable disease, resulting in death. [2]
The only reported protection against the Acheri is by wearing something red. Mothers have their children wear red beads, red rope, or red colored embroidery, weaved onto their clothing.
The color red appears to be a universal amulet in regards to protection against evil, because in European lore; red charms are also used to ward off evil spirits as well as the evil spells of witches. [3] According to The Paranormal Guide, salt can be another method of protection. Salt is lined around the property boundaries or kept in leather pouches carried by children. 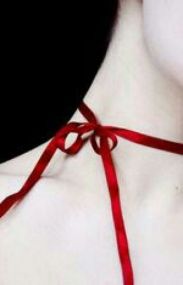 The Acheri seemingly are indestructible, however, there is a North American Indian (Chippewa) tradition that says that wrapping the red cloth of a medicine woman around the creatures neck would put it to rest. [4]
In Hindu mythology, in order for the Acheri to stop her spread of disease, she had to be appeased. This was done in two ways.
1) Beating a brass dish vigorously would apparently place the victim into a trance and while in a dancing frenzy, would somehow learn what sacrifice would satisfy the demon.
2) Another way would be to make a portable alter which included cakes and some lights, perhaps candles or torches? The alter would be worshiped upon, and then taken and placed in a remote location. The hope was that the Acheri would follow…ending its malevolent influence. [5]

The Acheri in Pop Culture

It is said that the Acheri can be ‘put to rest.’ by placing a red ribbon from a medicine woman around it’s neck…but how in the world do you catch it? Are there more than one?

Your writing prompt deals with the salt.

You are living in a mountainous region and aren’t necessarily Native American. You aren’t necessarily from India either. You are simply a person with a lowered immune system, which is mentioned in the video below as being one attribute for making you easy pray for the Acheri.

You are in a hospital bed with a curable disease but are very weak and have been getting worse for weeks instead of getting better and seem to have become resistant to the medication. This is strange to the doctors because you started off as having a fairly routine illness with predictable positive results after normal dosing with the medication. 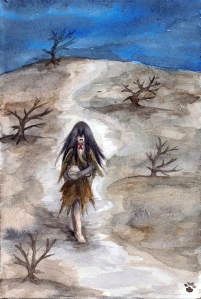 At night, in the hospital room, you surround your bed with salt, making a circle all around you…and a friend of yours, a friend whom you have told repeatedly about a scary child who has come at night to visit you- wants to see the Acheri first hand.

She sees the Acheri that night and because of the salt, you were protected on the inside of the circle, but your friend ends up in a hospital bed next to you. What happens next? The entire hospital is vulnerable, and you still don’t know how to get the red ribbon around the Acheri’s neck.

If you find this fun and interesting and decide to expand on it- let me know how this story continues in the comment section below, and as usual…happy writing!

@lacremehouston Thank you for hand crafting these amazing onsie cupcakes for my friend’s newborn little girl! They are beautiful! ❤️
@lacremehouston - love the packaging for my sister-in-law’s onsie cupcakes! Thank you SO much! 🧁
Thank you to Gaby @lacremehouston for this amazing diaper cake. What a talented and creative friend you are! I truly appreciate you!
A feel good Easter story- https://arjungwriter.com/2019/04/16/the-wolpertinger-code-a-feel-good-easter-short-story/ #writingcommunity
"Easter Fairies help with the baskets." -Anonymous Child -Read The Easter Sleuth https://arjungwriter.com/2019/03/31/the-easter-sleuth-a-short-story/ 🧚🏽‍♀️🐇🐰🥚📘
A Velveteen Rabbit Retelling- just in time for Easter! Ages 8-12. Pick yours up today! http://tinyurl.com/yyl25zmc